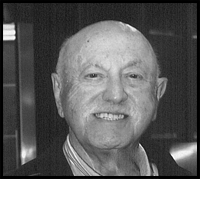 Following military service, Dr. Malnak was a Clinical Investigator in Liver Disease at Mount Sinai Hospital of Chicago. He practiced in the Chicago area as a Board Certified Internist for about thirty-five years. During that time he was a Clinical Instructor at Chicago Medical School and an Associate Attending Physician at Cook County Hospital for eight years and following that a Clinical Assistant Professor at the Stritch School of Medicine of Loyola University for twenty-five years.

He was Medical Director of a number of organizations, including the Emergency Department of Mount Sinai Hospital and Principle Health Care of Illinois. Dr. Malnak also served as Chairman of the Department of Internal Medicine, President of the Medical Staff, a member of the Board of Directors of Gottlieb Memorial Hospital in Chicagoland.

His interest in the Holocaust was sparked by the fact that his father came to the USA from Lithuania at age 16, leaving behind a large family. All the men, women and children of that family were sent to a death camp by the Nazis and exterminated.

The retired internist is married and has three living children from his previous marriage. He and his wife, Patricia live in southwest Florida with their Whippet—Paige, and Parakeet— Kiwi.